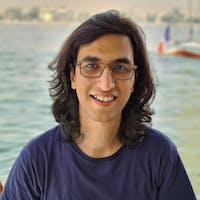 So in the last article, we discussed the first part of chapter 6 of High Performance MySQL where we talked about how schema design optimization and indexing are necessary for good performance but not solely enough as you still need to write optimized queries otherwise even with the best designed schema and indexes queries will not perform as well as expected.

In the last part we discussed slow queries and how they can be diagnosed and remedied by improving the data access type of certain columns or restructuring the query. In this part, we will discuss query execution basics and how the MySQL optimizes some of the most common queries.

In this section will skim through the life cycle of a SQL query where it gets turned into an execution plan. This cycle consists of other smaller steps such as, parsing, pre-processing, optimization, etc.

The parser and the pre-processor

The MySQL parser breaks down the query into a set of tokens and builds a parse tree, then it uses the SQL grammar rules to validate the query, i.e. make sure that it's using valid SQL tokens and that everything is in the correct order. The parser is responsible for raising grammar related errors.

The pre-processor then performs some semantic checks on the parse tree that the parser can't check, for example, validate that all mentioned tables and columns in a query do exist. It also resolves names and aliases to make sure that they query doesn't contain any ambiguous references. The pre-processor is also responsible for checking privileges to validate that the query could be run under the constraints of the user's privileges, so for example, there could be a valid DELETE query but the database user doesn't have a delete privilege on that particular table and thus the query is rejected.

Once the parse tree is valid, the query optimizer initiates the processes of turning it into an execution plan. Because there are often multiple ways for a query to be performed and yet yield the same result, the optimizer tries to find the best way to perform a query.

A database optimizer in general can be either one of two types:

Modern optimizers can usually be a mix of both. The MySQL optimizer is mainly a cost based optimizer but it performs some rule based optimizations as well. The unit of cost for the MySQL optimizer was originally the random read of a \(4KB\) page but it has evolved a lot since then and now includes more sophisticated cost measures such as the estimated cost of performing a WHERE clause comparison.

The MySQL server keeps its cost measure of the last performed query in an variable called Last_query_cost which can be inspected by running:

Note that the cost measure is just an estimate based on statistics: the number of pages per table or index, the cardinality (number of distinct values) of the indexes, the length of the rows and keys and the key distribution.

The optimizer might not always choose the best plan however, and this can happen for so many reasons such as:

The optimizations performed by the query optimizer have two main types:

Now let's take a look at some of the optimizations that the MySQL optimizer performs:

Which indicates that MySQL chose to first perform the constant lookup on the films table to find the desired row with id = 1 then in the second step, MySQL treads the film_id found from the first step as a constant everywhere else in the query. It can do this because the optimizer knows that by the time the query reaches the second step, it will know all the values from the first step. Notice that the film_actor table’s ref type is const , just as the films table’s was.

The preceding list is woefully incomplete because MySQL performs more optimizations than could be fit into a chapter in the book. It's meant to give a glimpse of how powerful is the MySQL optimizer.

Now that we discussed some of the general optimizations that MySQL performs, let's discuss how MySQL performs JOINs and how it specifically optimizes them considering that they are one of the most expensive queries to perform.

The common notion that people have about JOINs is that they are performed to find matching rows in multiple tables. MySQL extends this definition to include all queries not just all tables which includes subqueries (whose results get stored in temporary tables) and this also applies to UNION clauses because virtually, it's performing a join.

As you may have heard before, a JOIN can be performed in two different ways:

As you may already know, MySQL uses the nested loop join strategy because it's more general and doesn't require any special indexes to work. This means MySQL runs a loop to find a row from a table, then runs a nested loop to find a matching row in the next table. It continues until it has found a matching row in each table in the join. It then builds and returns a row from the columns named in the SELECT list. It tries to build the next row by looking for more matching rows in the last table. If it doesn’t find any, it backtracks one table and looks for more rows there. It keeps backtracking until it finds another row in some table, at which point it looks for a matching row in the next table and so on.

To understand this better, let's consider the following example:

What MySQL does can be represented by the following pseudocode:

As we can see, the previous pseudocode can be easily applied on a single table as it it's on multiple tables. It can also be easily extended to perform OUTER LEFT joins as follows:

The nested JOIN strategy can also be visualized by what's called a swim-lane diagram as follows: 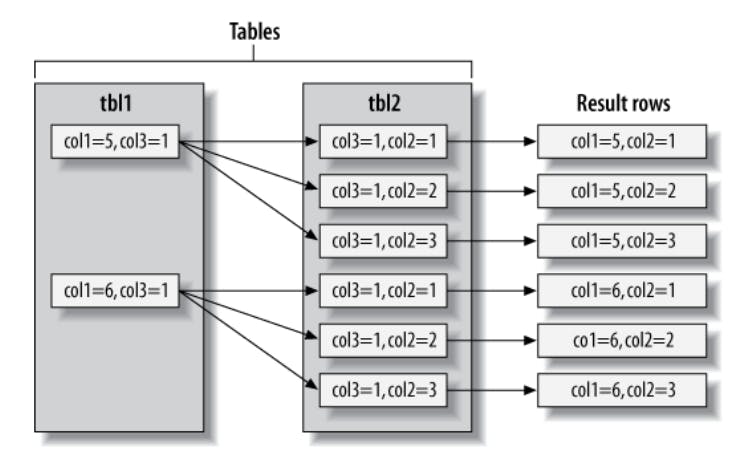 It’s not possible to execute every legal SQL query this way, however. For example, a FULL OUTER JOIN can’t be executed with nested loops and backtracking as soon as a table with no matching rows is found because it might begin with a table that has no matching rows. This explains why MySQL doesn’t support FULL OUTER JOIN.

Now that we know how MySQL performs JOINs, let's take a look how the optimizer tries to make them more efficient, mainly by reordering them. Let's take the following query as an example:

We can think of many different ways the previous query might be executed, like for example, MySQL could start with the films table and use the index on film_id in the film_actor table to fetch the actor_id values which it will later use to probe into the actors table to fetch the actor data needed. But is that the best way to do this? Let's take a look at how MySQL chose to perform this JOIN:

We can quickly notice that is a very different execution plan that we may have thought would happen. In this optimal execution plan, MySQL chose to start with the actors table and go in the reverse order, but let's see why is this more efficient. Let's force MySQL to stick to the specified JOIN order in the query by using the STRAIGHT_JOIN keyword and let's inspect the EXPLAIN result of that. It will looks as follows:

This shows why MySQL wants to reverse the join order: doing so will enable it to examine fewer rows in the first table. In both cases, it will be able to perform fast indexed lookups in the second and third tables. The difference is how many of these indexed lookups it will have to do:

It's obvious that MySQL will not be able to check all possible JOIN orders for any given query, but for example, a 20 table JOIN can be executed in up to \(3,628,800\) different ways. When the search space grows too large, it can take far too long to optimize the query, so the server stops doing a full analysis. Instead, it resorts to shortcuts such as greedy searches when the number of tables exceeds the limit specified by the optimizer_search_depth variable.

MySQL doesn’t generate byte-code to execute a query, as many other databases do. Instead, the query execution plan is actually a tree of instructions that the query execution engine follows to produce the query results. The final plan contains enough information to reconstruct the original query.

In the next part of this article we will discuss the Query Execution Engine and go deeper into how to optimize certain types of queries such as JOIN, COUNT(), subqueries, GROUP BY, UNION, LIMIT and OFFSET, etc.